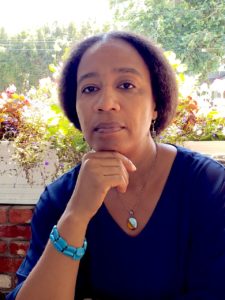 Myriam J. A. Chancy (1970-), Guggenheim Fellow & HBA Chair of the Humanities at Scripps College, is a Haitian-Canadian/American writer born in Port-au-Prince, Haiti, and subsequently raised there and in Canada.  After obtaining her BA in English/Philosophy (4-YR ADV, with Honors), from the University of Manitoba (1989) and her MA in English Literature from Dalhousie University (1990), she completed her Ph. D. in English at the University of Iowa (1994).  In 1997, she was awarded early tenure on the basis of two influential books of literary criticism published in the same calendar year, Framing Silence : Revolutionary Novels by Haitian Women (Rutgers UP, 1997) and Searching for Safe Spaces : Afro-Caribbean Women Writers in Exile (Temple UP, 1997). As the first book-length study of its kind in English, Framing Silence was instrumental in inaugurating Haitian women’s studies as a contemporary field of specialization. In 1998, Searching for Safe Spaces, one of the first in the field of Caribbean Studies to argue for exile as a distinct feature of (Anglophone) Afro-Caribbean women’s literature (with a cross-over essay focusing on Marie Chauvet’s novelAmour, Colère, Folie), was awarded an Outstanding Academic Book Award by Choice, the journal of the American Library Association.  In 2004, her work as the Editor-in-Chief (2002-2004) of the Ford funded academic/arts journal, Meridians : feminism, race, transnationalism was recognized with the Phoenix Award for Editorial Achievement (for redesign, cover art, and content) by the Council of Editors of Learned Journals (CELJ). Her third academic book, From Sugar to Revolution: Women’s Visions of Haiti, Cuba and the Dominican Republic, closes a trilogy on Caribbean women’s literature (Wilfrid Laurier UP, 2012; reprinted in paperback, Spring 2013).  She is currently at work on a Guggenheim-awarded academic monograph focusing on Black subjectivities intra-diasporically.  She was made a fellow the Guggenheim Foundation April 2014.

As a novelist, Myriam Chancy was awarded the 2011 Guyana Prize in Literature Caribbean Award for Best Fiction 2010 for her third novel, The Loneliness of Angels (Peepal Tree Press 2010; also shortlisted in the fiction category for the 2011 OCM Bocas Prize in Caribbean Literature), garnered a shortlisting for Best First Book, Canada/Caribbean region category, of the Commonwealth Prize in 2004 for her first novel, Spirit of Haiti (London: Mango Publications, 2003), and published a second novel, The Scorpion’s Claw (Peepal Tree Press 2005) to critical praise. All three of her novels are taught at universities and colleges in the US, Canada and the Caribbean.  She is currently at work on a fourth novel addressing the negotiation of national and individual traumas in Haiti, Rwanda and the US.

Dr. Chancy is Hartley Burr Alexander Chair in the Humanities at Scripps College of the Claremont Colleges; she previously held tenure-track positions at Vanderbilt University (Assistant), Arizona State University (Associate/Tenured), Louisiana State University (Full/Tenured), and the University of Cincinnati (Full/Tenured) ; she has also held visiting professorships at Smith College and the University of California, Santa Barbara.  She has served as an editorial advisory board member of PMLA, the journal of the Modern Language Association (Appointed, 2009-2012), of the Advisory Council in the Humanities of the Fetzer Institute (2011-2013), and of the editorial board of the Journal of Haitian Studies (UC, Santa Barbara; 2000-2015), and currently sits on the advisory board of Voices For Our America (VOA) housed at Vanderbilt University.

A frequently invited guest speaker nationally and internationally, delivering talks and creative readings on the subject of Caribbean, Haitian and social justice issues, she has served as an expert panelist and reviewer for the NEH, the Prince Claus Fund, and continues to serve as an expert reviewer for professional journals, university presses and tenure/promotion reviews nationally.